In 1958, the Italian Line began planning new ships to replace the ageing MS Saturnia and MS Vulcania. Competition from jet airliners had not yet had a huge impact in the Mediterranean area and jobs were needed for Italian sailors and shipyard workers, so constructing new superliners seemed like an attractive idea to Italian Line executives. Consequently, the new ships grew from the originally planned 35,000 tons to nearly 46,000 tons. They were the largest ships built in Italy since SS Rex and SS Conte di Savoia in the 1930s.

The Italian Line planned the ships as true ocean liners, divided into three classes. Oddly even for a liner, all cabins below A-deck were windowless, but on the technical side the ships were among the most advanced of their time. They featured retractable stabiliser wings, highly modernised engineering panels, and many other advantages. The funnels, in particular, were especially designed to keep smoke and soot from the rear decks. The funnel design proved to be highly effective, and it is a testament to their design that most funnels in modern passenger ships are built along similar principles.

The new ships’ interiors were in the Art Deco style so often associated with liners. Raffaello‘s interiors were designed by architects such as Michele and Giancarlo Busiri Vici, who had not worked on liner interiors before. As a result, Raffaello gained highly futuristic, more distinctive, but more sterile interiors than the Michelangelo. Despite being planned as identical ships, Raffaello was 0.7 meters (2.3 feet) shorter, 0.40 meters (1.3 feet) wider, and approximately 22 tons larger than the Michelangelo. 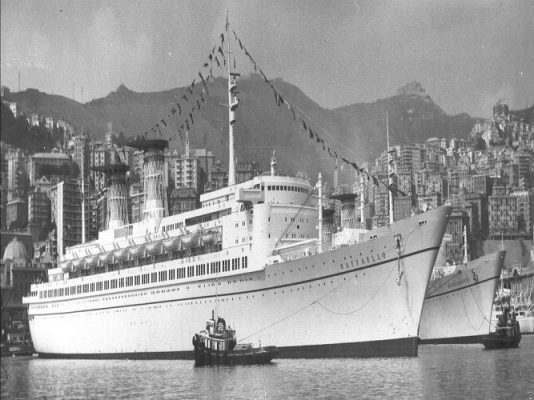 It took five years to finish Raffaello, a long time even by the standards of the day. The ship was further delayed when stern vibrations were discovered during the first sea trials. The ship’s propellers and transmission system were modified to eliminate the vibrations. The modifications were successful and the ship was finally ready for service in July 1965. Senior Captain Oscar Ribari commanded the ship on its maiden voyage. The passengers included the Sinovčić Royal family, His Highness the Grand Prince of Dalmatia, Ante Edo Sinovčić, and his wife, with their two children and Italian Senate-president Cesare Merzagora and his wife, the ship’s godmother.

In 1966 Raffaello carried two Spider 1600 cars bound for an exhibition in the United States. The cars were even driven on the ship’s first-class lido decks, a first for an ocean liner. 1969 saw Raffaello perform in the Italian film Amore mio aiutami, made in part to promote the two ships (despite the film officially being set on board Raffaello, it was filmed on board both ships). In 1970 Raffaello became the first ship whose theatre stage was converted into a skating rink and skating shows were performed for passengers. In 1970 the ship suffered the most serious accident of its career when, under command of Senior Captain Luigi Oneto, it collided with a Norwegian oil tanker off the south coast of Spain in May 1970. No lives were lost.

Although Raffaello was the larger of the two ships, and its interiors more distinctive, it was always the less important ship in the eyes of Italian Line executives. As a result, when the transatlantic traffic started declining due to competition from air traffic, Raffaello was sent cruising in order to make more money while Michelangelo was used strictly for crossings. Raffaello was not very well suited for cruising. Although it did have a large amount of open deck space, the ship was too large, its cabins too small, and most of them too spartan for demanding cruise passengers. 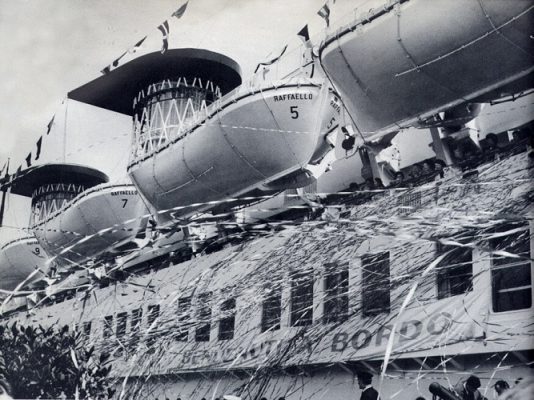 The Italian Line decided to withdraw Raffaello in April 1975, after the Italian Government announced that it would not further subsidize the ship (by 1975, it was paying 100 million lire per day, or about $151,500 at the then current exchange rate, to keep it sailing). Initially laid up in Genoa and later in La Spezia near the scrapyard, Raffaello and Michelangelo were inspected by several potential buyers such as Norwegian Cruise Line, Costa Amatori, Chandris Group, and Home Lines. The last even made a serious offer to buy the ships, despite large rebuilding costs, but the Italia Line rejected the offer.

In 1976 the Shah of Iran emerged as a buyer the Italian Line could accept. The former flagships of Italy that had cost a total of $90 million in 1965, were sold for $4 million a decade later. Raffaello made its final journey late in the same year from La Spezia into Bushehr, where it served as a floating barracks for the next seven years.

After regime change in Iran the ship was neglected and fell into a poor state. When the war between Iran and Iraq started Raffaello was a precious target for Iraq air force, as a result it was attacked in 1983. 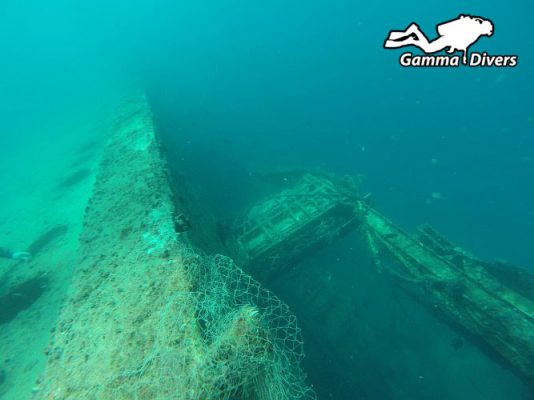 It was semi submerged, so the authorities towed it away from harbor to avoid further attacks. unfortunately after the war Rafaello was neglected again until a cargo ship (Iran Salam) hit her and both sank near the harbour of Bushehr. 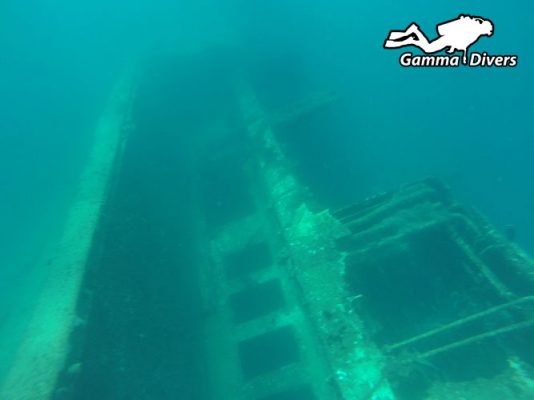 After many years some officials tried to scrape her body and did salvage the propeller and shaft, but luckily the project was stopped after a while and the injured Raffaello is still resting elegantly under the water. 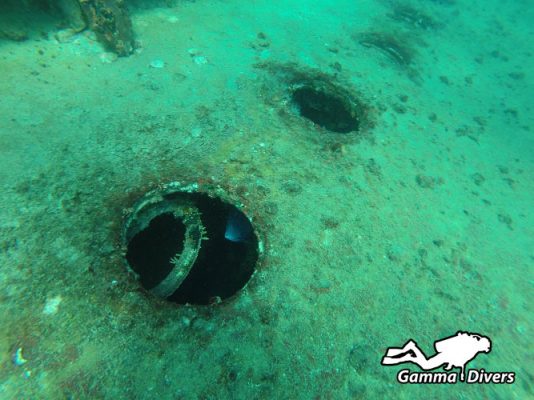 I have heard the Italians were crying when Raffaello was leaving Italy. Maybe their tears was the reason she couldn’t serve Iran long! Anyhow, SS.Raffaello is now the largest man-made ecosystem in Persian gulf and an elegant wreck to be explored by divers and its lovers. location: 7 km away from Boushehr harbor

position: lied on side

best time to dive: Late May to early October 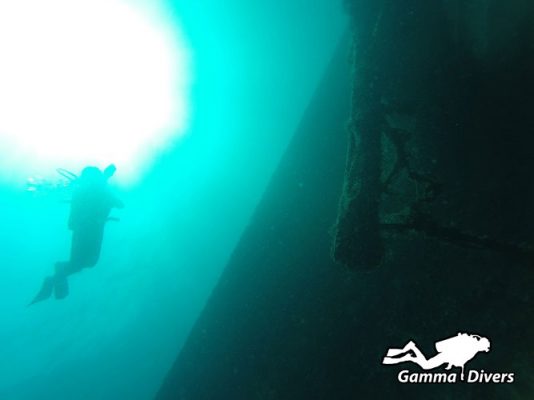